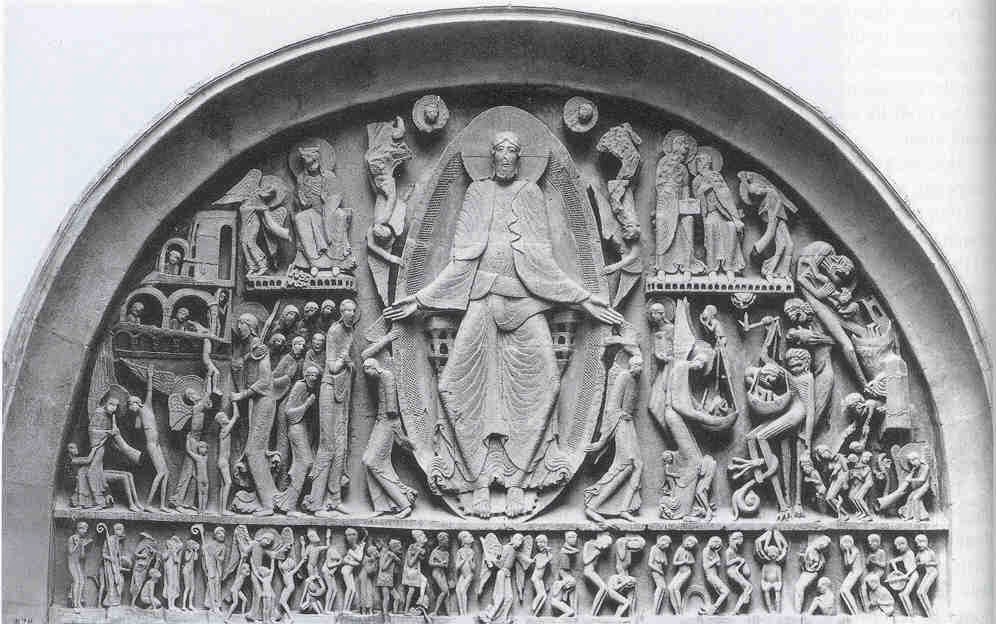 The weighing of souls sculpture 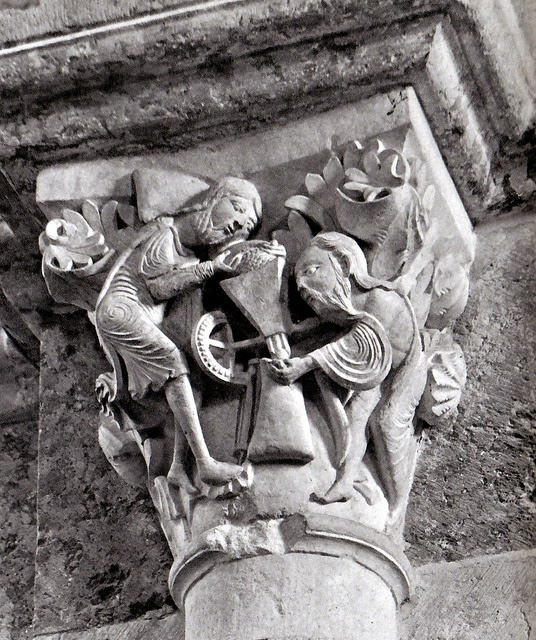 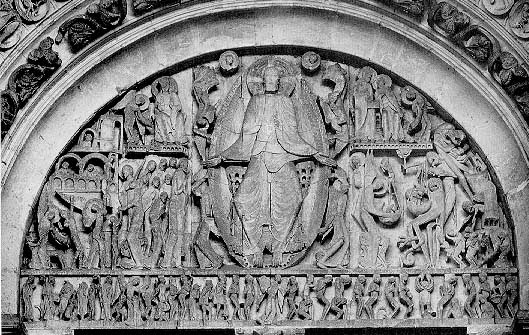 Architectural sculpture gave the church a new and powerful medium for teaching the word of God.  Most people were illiterate, but could now ‘read’ the stories of Jesus and the saints over and over in the form of sculpture on the church’s.
Some Romanesque facades were modelled in Roman triumphal arches and had life size figures of saints on either side of the door.  Many, however, had chilling images of God the farther in dramatic last judgment scenes sculpted on a monumental scale and placed on the great tympanum (semi circular shape) over the doors for pilgrims to see as they entered the church.
Death & the grotesque
Death in medieval times was understood in a very different way.  In Christian religious teaching, death was a passage to the next, more important life, and every dying person faced the question of whether they would receive mercy from God or face the eternal damnation of hell.
For this reason, Romanesque art produced a greater wealth of images of death in all its forms than any other period in the history of Western art.  At a time of deep religious faith, a medieval believer entering the house of God was faced with the most terrible images that imagination could conjure up of the end of the world and a God of vengeance sitting in judgment.  The grotesque images of devils, demons and tormented souls were intended to create a fear of hell and other fantastic creatures, but also in the representation of the human figure.  No attempt was made to portray God or the saints in a natural way.  Instead they were blocky, dignified and unreal or depicted as strange, elongated beings in a swirl of limbs and drapery.
Sculpture on Romanesque churches
Some of the most important impressive Romanesque sculptures are found at the cathedrals of St Mary Magdalene in Vazelay and saint Lazare of Autun.
St Mary Magdalene in Vezelay  (discussing sculptures inside this church you have already studied)
Inside the western portal over the doorway in the narthex (entrance or outer porch) is the great tympanum of the Pentecost (Christ brining the holy spirit to his apostils in the form of fire).  A massive Christ sits serenely inside a mandorla (oval shaped halo) with his arms thrown open, symbolizing the glory of his resurrection.  His beautifully pleated robe is arranged in whirling patterns, and from his hands the flames of the Holy Spirit fall to the apostels’ heads, giving them the strength to teach the word of God to all races depicted above and below.  None of the sculptors who created the wonderful saints, angels and devils carved into scenes of the capitals of the pillars at each intersection of the nave of Vezelay signed their work, so they remain anonymous works of art.  Many display imagery typical of the Romanesque fascination with the grotesque, but the church’s most interesting as well as beautiful capital is its most famous: The mystic Mill, which shows mosses pouring grain into a mill while St Paul the apostle gathers the flour.  The grain represents the law given to Moses and the mill symbolizes Christ.


Saint – Lazare in Autun
The Tympanum
Pilgrims entering the church of Saint Lazare at Autun passed beneath the great tympanum in the west facing doorway.  As they ascended the steps, the dramatic scene that met them was calculated to inspire hope, but it also put fear into the hearts of sinners.  The weighing of souls at Autun is probably the most famous Romanesque last judgement scene, particularly as the artist chose to sign it.
The Last Judgment
A huge figure of impassive Christ sits on his throne in the centre of a world filled with tiny figures of souls rising form their tombs as angels sound the last trumpet.  St Peter, with a large key, welcomes the saved to Paradise, while the damned are dragged in dramatic fashion to hell by grotesque demons.
The Weighing of Souls
On the lintel below Christ’s feet on the left, the damned are driven from him, naked, by an angel with a flaming sword, while giant hands grip a tormented soul.  Various forms of sin are depicted here – a miser has his heavy money bags and an adulteress us being gnawed by snakes.  Above their heads, an impassive archangel Michael weighs the souls while terrified figures hide beneath his robes.  A grotesque devil tries to pull down the scale and another sits in it to make it heavier, before a laughing demon pours those condemned forever down a chute towards the gaping jaws of hell and the fires below.

Gislebertus - sculptor
It was a rare occurrence in medieval art for an artist to sign his work, but the sculptor of Autun has placed his name Gislebertus hoc Fecit beneath Christ fop all to see.
It is known that Gislebertus trained at Cluny and probably worked as an assistant at Vezelay, but he was by now a mature artist and this was his crowning glory.  The unique style of elongated figures and exaggerated expressions is particularly and very distinctively his own.
The last judgment theme has an intensity not seen before and the scale and drama of the imagery could not have failed to inspire awe in an impressionable pilgrim visitor, particularly as it would have been painted in full colour.  Gislebertus, like all good storytellers, seems to have had a taste of horror, and the gruesome scene conveys the impression that the artist relished the opportunity to portray this one in all its horrific detail.
Carved capitals in Autun
The capitals on the supporting piers inside the cathedral were all carved by Gislebertus himself and also show his skill as a sculptor and storyteller.  Some of the best are from the pillars of the choir.  On these, fine ornamental foliage is combined with figures in expert fashion.  However, their key element is the story itself and the simplicity of its telling.