Please complete the follow HL past exam paper question for Tuesday 15th May.  I also need to take up any more remaining essays on Jack B. Yeats. 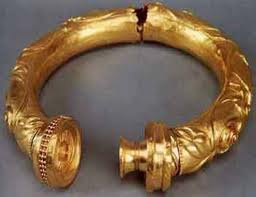 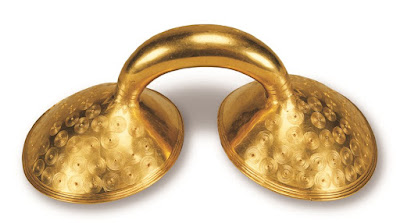 NOTES ON THE DRESS FASTENER (AKA FIBULA)

The gold dress fastener  found in Clones, Co. Monaghan, dates from the 8th century B.C. and is decorated with many small circular shapes engraved into it.  It is pure gold and weighs over 1000 grammes it probably was used for ceremonial occasions.It can be seen in the National and belongs to the Dowris phase of the Late Bronze Age at circa 700 B. C.  It has a length of 21.5 centimetres.It functioned as a double button meant to slip through two holes in a garment such as a cloak.  The largeness and elaborate decoration on the surface probably meant it was only worn infrequently.The connecting bow tapers from the centre toward each end, and the ends join the bell-shaped terminals asymmetrically.  Three small hatched triangles lie along the crest of the bow.  Three bands of parallel lines, separated by bands with diagonal hatching, run around the bases of the bow.  A hatched chevron design runs around the margins of this band of decoration, both above and below.The exterior surfaces of the terminals are magnificently decorated with small pits surrounded by concentric engraved circles, scattered freehand and occasionally touching one another.A triangular area between the end of the bow and the inner edge of the terminal has been left undecorated, and a similar interruption of decoration appears on the underside of the bow.The rims of the terminals carry three ridges, both inside and outside.  A ring of hatched triangles rises from the highest inner ridge.This type of fastener is an Irish adaptation of a northern European clothespin, in which two conjoined circular plates are furnished with a fastening pin; pins are absent in the Irish form.  Many of these fasteners (all except two are in gold) have been found in , where they have a wide distribution; such ornaments were also exported to .  Also known as a fibula or fibulae.