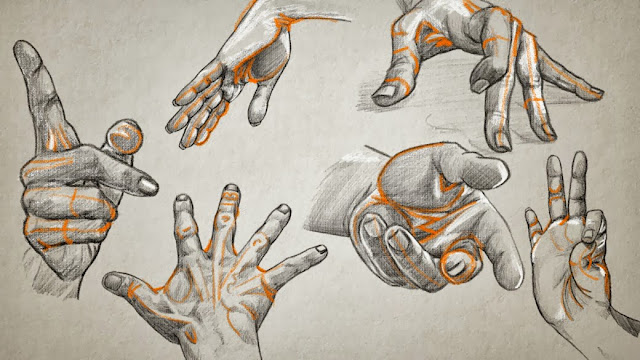 Drawing the hand....
Start by copying a simple picture of a hand. Note that the arm angles in at the wrists and then widens out at the beginning of the hand. Most beginners forget to narrow the arm at the wrist and try to draw the fingers coming straight out of the arm. It is helpful to lightly draw a mitten shape first to get the overall shape of the hand and then erase it later after you have added the fingers

In order to accurately draw hands, it is necessary to understand the concept of foreshortening. The fingers appear to be shorter in the second picture because you are looking at them from the side view and they are moving away from you in space.

I took the two photographs above of the exact same hand from the exact same distance. Yet the fingers in the second hand appear to be much shorter. They also appear to get narrower towards the tips. This is the optical illusion known as perspective.

Think of the fingers on a human hand as very narrow cylindrical forms﻿. Imagine that each joint of each finger is actually the same shape as this soda can.
It's easy to see how the cylindrical shape of the soda can gets narrower as it gets farther away from the viewers eye. It also appears shorter in the second photo because it is angled away from the viewer. Think of fingers as three dimensional cylindrical forms moving through space and you've got it!!

Assignment: Practice drawing your non-dominant hand. Start out by drawing the front and back of the hand flat on the table. Then try drawing it from different angles. Try copying photographs of hands before you attempt to do some of the more complex foreshortened views from life. Use the sketches below by famous artists as a reference.